Originally recorded by Tim Hecker from the album Harmony in Ultraviolet (Kranky, 2006)

The track appears on the compilation "YOU'RE RELATED" Vol. 1: Montreal Artists Covering Montreal Artists" curated by CJLO 1690AM: http://www.cjlo.com/magazine/feature/youre-related-vol-1 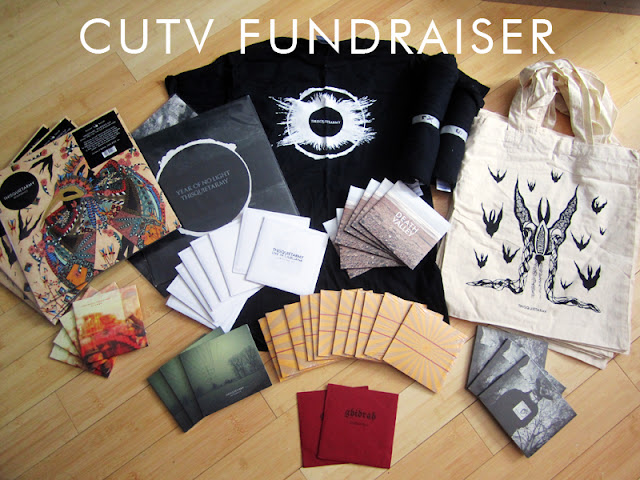 Hey, so this is the rest of the merch that I brought back from my recent THISQUIETARMY Eurotour:

To further the matter of awareness against police brutality (see this video i made: http://www.youtube.com/watch?v=mJsG7ev454I), I've decided to donate all the profits (after costs) of the sale of these items to CUTV (Concordia University Television), which has been going on site to film and report every single protest in real time - you can tune in live, here: http://cutvmontreal.ca/

Last night, we have witnessed the police threaten their crew & attempt to break their camera more than once - it was appalling. The CUTV crew is doing an outstanding job in terms of exposing the realities of what is really happening at these protests. Again, whether you're for or against the reasons is a moot point - what we are currently witnessing is a police state spreading terror & oppression, following the totalitarian-like actions of our government by attacking our basic & fundamental rights.

According to the surveys, the majority of the Quebec population is behind the government actions - sadly, it is not surprising at all considering that outside of these protests, the only way people (suburbans, citizens in the countryside or those who think they are not affected directly) are hearing about what's really happening is through highly-filtered channels & medias. They are not able to see beyond agitators, firestarters & broken windows - protesters are being viewed solely as troublemakers, which makes them dismiss the credibility of what the fight is really about. Like most, they are just sick & tired and want order restored at any cost. That's how they justify the motion of the anti-democratic Bill 78 and the use of police brutality against citizens that could be your kids, your friends, acquaintances, co-workers or members of your family.

Through the lenses of CUTV, they can walk in the protesters' shoes and see what is really happening with their own eyes. If they can feel their anger & indignation, then maybe there'd be some hope that they could have a change of heart. This is why we need to help, promote & support CUTV, which spreads awareness: http://cutvmontreal.ca/

This fundraiser will last a few days (or until stocks last). Of course you can buy other non-rest-of-Eurotour-merch items in the store: https://thisquietarmy.storenvy.com/ at the same time - they could be included in the fundraiser as well. Also, if you're from the Montreal area - you can save on shipping costs & meet up in person of course (since some of the quantities are very limited, please still buy it through the store to reserve your item and i will reimburse the shipping fees).

If non of this merch stuff interests you, you can still make a donation directly to help CUTV maintain their live broadcast capabilities and continue to bring us the most viable on-ground coverage, here: http://cutvmontreal.ca/station/fundraising/live-broadcasts

Thanks in advance!
e.

Update on the CUTV (Concordia University Television) fundraiser: we raised a bit more than 200$ in profits, so i chipped in & donated 250$ in total. Thanks to everyone who purchased something during the last week!
Publié par THISQUIETARMY à 18:49 No comments: