So here's a short account about the two shows with Caspian during the weekend of the 18-19th of September. The Montreal show was moved from Bar St-Laurent II in the Mile End to Loft from Hell in St-Henri. If you don't know what that means, well it's like moving a show from Manhattan to Brooklyn if the former's the really cool hip & trendy cultural artsy area, and the latter is where the cheap low-rent trashy area.

Caspian usually attracts the clean-cut preppies and yuppies, so it was interesting to see who who trek down to St-Henri for a sweaty, dirty loft show in a courtyard surrounded by industrial lofts, practice spaces occupied by a commune of squeegee-punks & their nasty dogs. I'm pretty sure some drove by it and went back home. Some didn't even find the place, as it is hard to find as it's hidden behind a huge building whose civic number was the last one on the street, next to train tracks, above an underpass, near an alley. The good thing about all this is that the venue is really small, maybe 400 square ft. of space between the stage and the backwall. The other good thing is that when it's loud, it's fucking loud, and there is no escape.

For this show, I used some amps I found in the loft... I went there early to check what I could use, as there is no PA. I found a Ampeg Bass head going through a 2x15" cab, and a Laney guitar head through a 4x12" Marshall cab. TOTAL FACE MELTER. Might have been one of my most satisfactory performance, and that says a lot. I wish I had a picture of my setup, but I only have this picture of the courtyard while I was practicing some drones at the Loft around 4pm that afternoon: 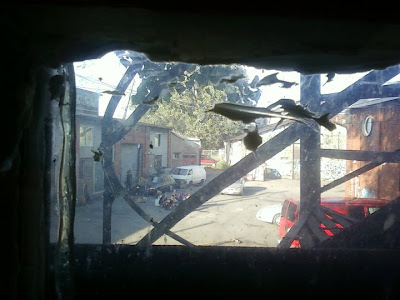 The next day, I was scheduled to play in Burlington, VT. More precisely: Winooski. Caspian was nice enough to do me the huge favor to drive my equipment across the border with their own stuff. Meryem joined me at the last minute for the 90 mins drive to the USA. When we arrived at the Monkey House venue, the nice guys from Black Lodge booking brought us some food that they made. We also had 2$ off bar consumption, so I had a few of the local Switchback on tap. Did you know that Burlington, Vermont is named the 4th best city in the WORLD for beer lovers?

Anyway. During the whole time, I was thinking about my show the night before with the two amps, and how I couldn't go back to playing into the PA anymore. Especially the Monkey House's, which looked like it would sound really thin & weak. I was really starting to stress about that. Finally, I asked Philip and Chris from Caspian if I could borrow their amps, and they agreed. Philip had a Fender Twin Reverb going into a 4x12" cab, and Chris had this really nice head (forget the name --- but wow, I felt bad about using it) going into an 8x10" cab. It sounded really amazing, and I think it might've been even louder than at the loft. Again, I wish I took a picture of that set-up. Thank you so much guys. I don't know what the Burlington crowd thought of my set, they were sort of Abercrombie & Fitch-ish mixed with Birkenstock-ers - a lot of them seemed uninterested, going outside back and forth during the whole evening. One Vermont Cynic didn't say anything bad about the performance, so that's good.

On the way back home to Montreal (left Winooski around 12:30am), we almost hit a deer. It was really freaky as it didn't flinch nor react... AT ALL. I've witness the true meaning of 'deer in headlights':

Ok, so that wasn't so short. I will write about The Théâtre Plaza show aka the Black Metal show, in another entry.
Publié par THISQUIETARMY à 20:59 No comments:

thisquietarmy's album Aftermath was nominated for 'Best experimental album of the year' by the GAMIQ (Gala Alternatif de la Musique Indépendante du Québec). The nominees were revealed last wednesday and the winner will be determined by a specialized jury and will be announced at the gala on November 14th.

I'm not taking this seriously, of course. However, one thing is certain: the nominees were voted by the local press, media, record stores, labels, promoters, etc. So it's definitely cool to have gotten noticed by the "industry" and appear in that list. I'm up against fellow friends & colleagues Menace Ruine, Black Feelings, Grimes, Millimetrik & K.A.N.T.N.A.G.A.N.O., whom I've all crossed paths with... 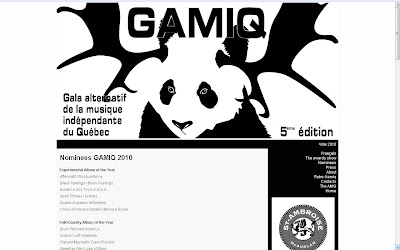 On another note, Fabrice Allard of EtherREAL, a reputed french webzine, seized the essence of the Meridians EP w/ Scott Cortez and wrote an excellent review in French. Always glad to read one of his reviews. 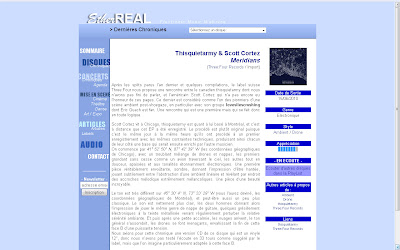 I've just played 3 shows this week, I'll be writing about these shortly in another entry...
Publié par THISQUIETARMY à 23:29 No comments:

Basses Fréquences has announced the release of the first installment of my collaboration with Yellow6 titled 'DEATH' for October 2010. The recording took place in Montreal when Jon (Yellow6) was in town for the Under The Snow festival in March '09, and it was mastered by Dirk Serries of Fear Falls Burning fame!

We are happy that BF has picked it up; I personally love to deal with Jerôme, especially for this record, because it's like he was part of our band and he played a great role tying up loose ends to help us finalize the album's concept, titles & artwork. He's also very attentive to every suggestion and every detail of the production. BF is a great emerging label in the ambient scene and they are highly motivated to release quality products!

Interview with The Silent Ballet

Interview with Tom Meagher for TSB.

Another lengthy one. Here are the main topics covered: 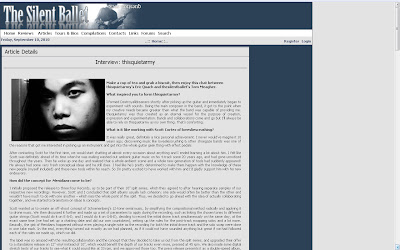 Thanks to Tom & TSB for this coverage!

On a side note: TSB is a pretty active webzine that covers all genre of instrumental music & more, and I really appreciate them. They've always treated me well, all my records I've been involved in have been given fair reviews and great scores even though I have been hearing bad things about their reviews from peers, as I mentionned in a previous entry, which is unfortunate.

Perhaps "hateful" is an exaggeration and I'd gladly re-iterate the term since "hateful" isn't exactly from my point of view, but rather from the resentment I've been feeling from other artists and labels that get bitter when they get a bad review, understandably. I won't name any names, and I do feel bad for them because sometimes I also don't agree with the reviews that were given. But as usual, I find myself in this neutral zone as I understand their hostility as hard working artists & labels as much as I understand the reviewer's right for opinion. Thus, "harsh" is a more fitting term for their overall reputation. On the other hand, I do approve of the need for harsh reviews, it filters the mediocre out from the over-saturation of material that there is out there. As long as everyone plays nice and is respectful of each other!

A TSB writer recently contacted me to discuss about it and has pointed out that most people who read the site don't pay attention to their scoring breakdown. I am also guilty of this, and I think it's pretty enlightening:

The Silent Ballet uses a 10 point scale with .5 increments. 5 denotes an "average" score, and anything above that is considered generally positive, whereas anything below is generally negative. The Silent Ballet editorial staff respects the views and opinions of its reviewers, and due to this practice exact scoring will differ from reviewer to reviewer. However, reviewers are asked to rate albums with the following goal in mind:

The bottom half of the scale is a mirror reflection of the top, completing the idealized bell curve, but TSB reviewers are notorious for being unable to tell a "horrible" album from one that is just plain "bad."

This is like the french high-school system (from France, but in Quebec) that I went to. Everything was graded on /20, but 12/20 was considered good and you needed 10/20 to pass. However, there was rarely anyone that received a grade above 16/20, especially in French literature classes. It was pretty harsh grading, but everyone who went through that school wrote in french a hell lot better than most people. Something to think about...
Publié par THISQUIETARMY à 16:27 1 comment:

I recently played shows with Noveller & unFact (David Wm Sims of Jesus Lizard) in Toronto (August 28th) and Quebec City (August 31st). It was good to meet them. Thanks to Tad & Luke for setting up the shows.

Not much to say about them; the weather was really hot and humid. I gotta say that it was difficult to enjoy traveling and performing while breathing such heavy air; the atmosphere of both shows were somehow stale, exhaustive and almost depressing. The Toronto show, a saturday, felt like a monday or a tuesday, while the Quebec show was actually on a tuesday - so that was forgivable. I've never liked Toronto, I just get this 'why am I here' feeling every time I'm there, which is like 4-5 times a year. It's hard to get a good show there too, everything is so spread out and there's no tight scene, but I'm always trying to play there because in Canada's biggest city, there's gotta people who likes ambient and I gotta try to conquer them. The urban planning of the city hurts my eyes and makes me nauseous as well - definitely one of my least favorite city, sorry. The pulled-pork Big Fat Burrito in Kensington Market, while pretty good & filling, barely makes up for it, sadly. Speaking of food, one thing I like to do in Quebec City is stock up on pizza and quiches at Le Crac on St-Jean, and put them in the freezer for times you don't feel like cooking in the next month. 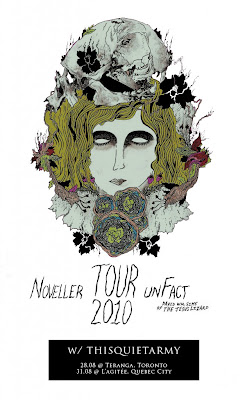 Weirdly, the highlight of this mini-tour was actually Hamilton, where I did not perform but drove there a day earlier to hang out with my friend Ryan/Electroluminescent & Beth. We had a good time hitting a lot of bars in town. I barely remember what we did actually, it's a haze, which means we had a good time. We started by getting beer & food at some type of pub-house place; popcorn alligator, sweet potato fries & vegetarian nachos were consumed while playing board games. Then we went to Academia, this sketchy bar on James St. - nicely decorated with airplanes and sports memorabilia left from previous owners. It was empty but we went for the cheap 2.50$ pint. Then we stopped by The Brain where they had a unique selection of beers I've never seen in their fridge, and some weird local encounter. Later, we walked back and bumped into people coming out of a house party. Turns out, it was actually a house show and there were people from Montreal playing! Of course, it was the Hobo Cult tour, with Magic Beach, JLK and Bernardino Femminielli accompanied by JS (of Red Mass, ex-Fly Pan Am, etc.) on bass. We got in just in time for the performance of the latter, which really made our night. We all went out for more beer later at the Four Stars Corner bar or whatever it's called, where more weird encounters ensued... I'll skip the details. We did however managed to stretch the bar's closing time up 'til 2:45am! Closing time in Ontario is 2am, almost felt like we were home.

Next shows will be with Caspian on Sept. 18th & 19th. Should be good times!
Publié par THISQUIETARMY à 19:05 No comments: