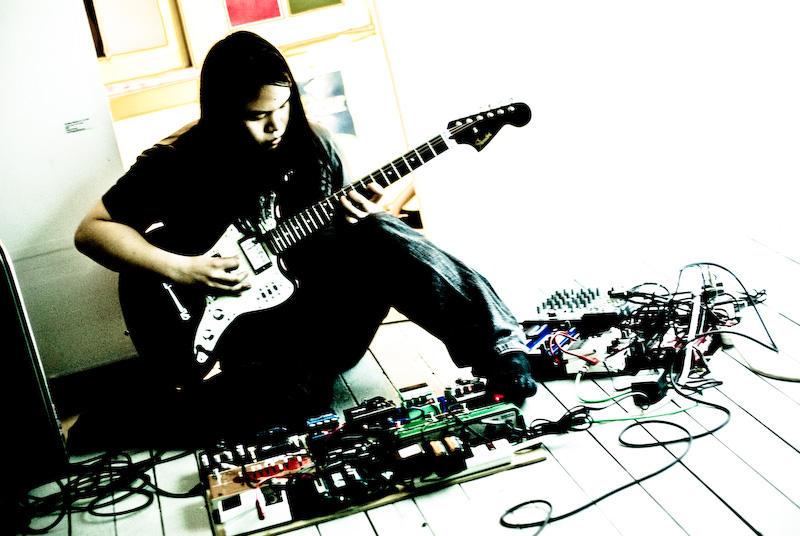 I've decided that I should write more in this blog, and make it more personal instead of just using it to make announcements. So let's start. How about a recap of the last few shows? I drove to Toronto a couple of weeks ago, and bumped into Pas Chic Chic at a rest stop on the 401 as they were playing the same night at the Drake Hotel - chatted a bit with Roger, Radwan & Marie-Douce while in line to get a Tim Hortons' coffee.

The Toronto show was better than any other Toronto show I played before with Destroyalldreamers - mainly because well, people attended! The sound sucked but I made it work OK I think. Good to see Kevin from The Riderless & meet Dorian from Holoscene. Aidan Baker played with Naw & Jacob Thiesen as Whisper Room - I thought it was pretty cool.

I did some records store the next day, dropped CDs off at Soundscapes & left a promo at Rotate This, before heading to Hamilton - and then to Waterloo. By then, the fog had settled on the way there and it felt like we were driving inside the artwork cover of a Jesu record. We arrived at the Trepid House, where we got treated for some homemade food and the grand tour of the house: three-floors, theme-rooms (pirate room, arboretum, aquarium/studio, etc.), living room as the main space for music, attic, etc. Because Mahogany Frog had a 45 mins set-up & tear, Jeff proposed that I play in the attic, which is a gallery space. The house P.A. / soundsystem was wired throughout the whole house, so people were able to come up to sit & watch, or listen in one of the rooms - I thought that was such a fantastic concept, that I decided to play 2 sets (opening & closing) - it just felt warm & comfortable, it felt like home. The sound in the attic was also perfect.

The Hamilton show was a completely different beast. The vibe was completely off and at the other extreme. The venue was large and cold, depressing. The rain didn't help. It just felt dark. And I think people could feel it in my set, as it was a completely discharge of angst & rage, yet in an ambient context… there was piles of layers of confusion, very hazy but very present at the same time. That's how I felt anyway. Ryan (Electroluminescent) joined me on stage for the closing song (Warchitects), playing bass-synth. We also did some improv at the end. Also met Beta Cloud who came from Buffalo to see this.

All in all, a great mini-tour… There isn't many pictures to share, unfortunately. Here's Owen Cherry's shots from the attic show: http://trepid.org/events/houseshows/photos/2008-04-11%20-%20thisquietarmy/

In other news, thisquietarmy's Unconquered debuted at 4 of Montreal's CKUT 90.3 MHz Top 30 charts, and is currently 23 on CIBL 101.5 MHz. That was quite surprising…

Also some Unconquered reviews and heads-up:

"Unconquered is a fitting name for the release – it presents unheard-of territory within the confines of the ambient-drone subgenre, and quickly thisquietarmy claims it as his own. The release is so fresh, so satisfying, that it makes you wonder why no one else has tried any of this (on this scale) before. I can't answer that question, but I do know this: there will be a lot of artists following in the footprints left by this album. It may not be a perfect album, but the most adventurous ones never are – perfection requires a commitment that musical explorers cannot make, and to fault them for pushing the boundaries of genre is to have gravely mistaken priorities." (by Zach Mills)

"While we're in review mode, there are a couple of other discs that you should bug out to, namely Unconquered, by Montreal solo ambient artist Eric Quach's new joint Thisquietarmy. This disc actually comes to us from Krakow, Poland's Foreshadow label, and if you are getting hip to the exploding drone scene, Thisquietarmy is guaranteed to turn you into a veritable pile of ooze. Instead of just relying on the same old dirt-box distortions and done-to-death loops, Thisquietarmy sounds light years ahead of the huge traffic of drone debuts being released right now." (by Jonathan Cummings)