I am back in Montreal after a few days on the road. I had to cancel the U.S. trip, partly because some shows didn't work out as planned, but mostly because my back is too weak, and i've started some chiro treatments. I'm also mentally exhausted from my dayjob and i haven't had any time off for myself. I'll reschedule the shows for this fall, hopefully.

Saturday was a great night at Casa, it started slowly but ended up being a full-house. granted, facebook invites don't mean shit once again, as practically no one of the "attending" people came. But so many people showed, people who actually came for a specific band/act or just curious people who happened to be there. I think everyone was surprised at how good the music was throughout the night, it was a very good diverse bill and the sound was amazing. I've seen everyone play at least 3-6 times before, and everyone played their best sets yet - particularly Arms and Sleepers from Boston who had a live drummer for the first time, which made quite a difference.

I had Elika from NYC & their two friends sleeping at my tiny place on air mattresses. We ate bagels on the rooftop after the show and had breakfast at Eggspectation, then took a stroll in the Old Montreal and head straight to Quebec City for the house show sunday which was a lot of fun - hosted by the guys who run the P572 label. There was just a handful of people, food & drinks. Everyone was friendly, attentive, receptive and grateful to be pleasantly surprised by our music. The sound was pretty good considering that there was only a vintage Traynor mixer & old P.A. speakers; we had to project the visuals on the ceiling.

After some 800 km & a few pit stops, I arrived in Toronto around 7pm. Again, just a handful of people showed up for a monday night, but the sound was huge & killer! Perhaps the biggest surprise of the night was Boyd Devereaux, the Maple Leafs hockey player who showed up at my show.

Ryan (Electroluminescent) & Beth (gf) took the day off the next day just to hang out with me, we drank until 6am & played some Wii. We woke up at 1pm and went to this all-day breakfast diner called Mars Diner in Beaches Park. Then we walked down to through the park, on the boardwalk and sat down on the beach for a while. It was a great day. Proof: 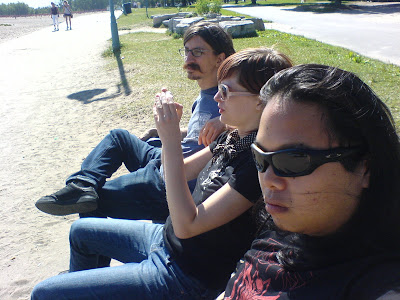 We went to Soundscapes afterwards, bought some records to listen to on the way back home, mainly some Faust, Can, Slowdive, Tren Brothers, Sigur Ros & Portishead. I have the rest of the week off, and a bit of next week as well. I'm just going to take it easy for once.
Publié par THISQUIETARMY à 00:07