Saturday Nov. 1st at the Loft from Hell was a blast, mostly because it's an old bomb factory hidden behind the courtyard of the Bread Factory in St-Henri. Martin (Aun), Reuel (Maggot Breeder) & I (Thisquietarmy) opened for Toronto's Holoscene (who played a fabulous set), as a tag-team improvised collaboration to a japanese war movie backdrop (can't remember the name, Reuel?). Reuel went first for about 15-20 minutes, bowing a hanger stucked in his guitar, raising it as high as possible, then I joined him and we did some noise together. When he went off the stage, I did a 15 minute drone-ambient trance-like solo set, piled up sound-on-sound with delays, tremolo, phaser, fuzz. Then I nodded to Martin and he joined me on stage - our collab was pretty cool, I was playing with the filter sounds going after my soundscape-loops the whole time, sweeping drones while he played low bassy distorted notes… I got off to let him play his set. It was the first time Aun had drum beats, it was a nice-change of pace for the set, by then the audience was already inflicted about 45 minutes of continuous wall of sounds. When his set finished, Reuel and I went back on stage with him and we all went into noise-war mode. It was getting really loud & intense at that point, I was afraid we'd blow up the speakers or something… I know my monitor was crackling but maybe it was my filtered sounds. Everyone really liked it, you couldn't escape anywhere, you didn't have any choice but to absorb it with your head in your knees.

The cops showed up like almost an hour after we were all done playing. Such a ridiculous delayed reaction. By then, the place must've stunk weed and sweat, people were high and drunk, but they left us alone somehow. We all hung out until 3am, cool night all around. Here's a picture of the Maggot Breeder/Thisquietarmy improv by Marie-Josée Roberge : 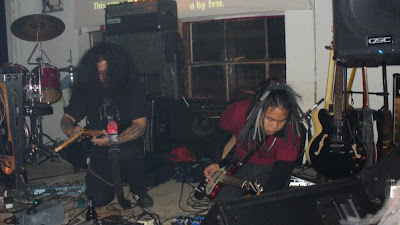 Thursday Oct. 23rd at Casa Del Popolo. Not much to say, another smooth-sailing night. Nadja played a wonderful set with visuals... also performing were the .cut & Maggot Breeder collab and the duo of Whilst, both were very good as well. It was the 'Blackhaunter' CD launch, but we just focused on having a good time. I brought my Moog MG-1 synth for bass and synth-lines on a couple of songs and performed a version of my upcoming track on the Walnut & Locust _post 3" compilation, out soon in the local Distroboto machines. Aidan & Leah slept over, and we went to Chez José for crepes on Duluth the next day. I called off work of course, as I didn't sleep much. Here's an ambient picture of the show by Annie Stephens who also did the artwork for Blackhaunter : 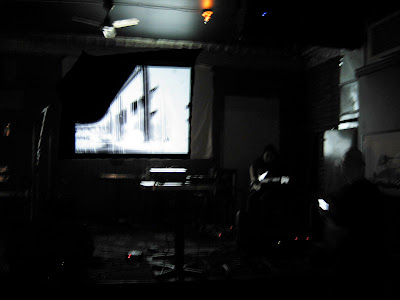 that sounds really awesome dude, wish I coudl of made it, nov 1st especially