Yesterday, I stumbled upon the Tren Brothers gig at La Sala Rossa, for the Suoni Per Il Popolo. The Tren Brothers are Mick Turner & Jim White from Dirty Three - basically Dirty Three without Warren Ellis, the violinist. I saw Dirty Three in 2000-something, at the Cabaret. They were accompanied by Zak Sally, then - also bassist of Low, which was one of my favorite gigs of all-time.

The Tren Brothers played a tremendous set. I never knew that a drummer could make me fall asleep, as I was drifting in and out of consciousness. Of course the 6-7 beers I had at a corporate party prior the show also had something to do with that. Anyway, check them out if they're playing near you.

Speaking of Low, the Gospel Retribution Choir led by Alan Sparkhawk are playing tonight, which is very, very tempting...

Tomorrow I'm playing at the Friendship Cove, a DIY artsy underground loft in the middle of the abandonned, ghostly streets of Griffintown. 215A Murray Street is the address. I'm opening for Place Hands, this math/indie pseudo-hardcore band from Toronto & newcomers to the scene, Saccidananda. 5$. Check it out. 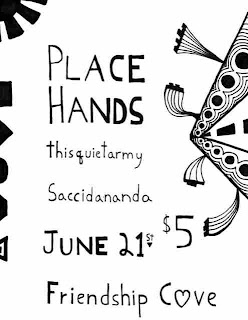 i didn't realize you had this blog!? what's up with that?
too busy sleeping underneath yr desk at work....

Hey :) I saw Tren Brothers in NY last week!!! They were awesome. And I know just what you mean about almost falling asleep, the music was so rhythmic that it aligned with, like, the natural universe patterns or something. Also, that little movie they were screening was totally hypnotic.