I played my first Suoni Per Il Popolo gig at Casa del Popolo with Grouper. I played well enough. Dave Bryant from Godspeed was doing my sound and it sounded real powerful. On a local message board, he gave me huge props: "i think it was an insult that TQA was slotted first in the lineup. people should be losing their shit for this dude." 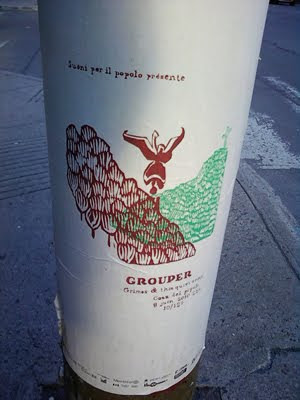 Not much to say actually about the other shows, just momentary good times. The first thing we did when we got to Quebec City was to unload the gear at the venue, ditch the cars and buy some booze. We drank in the streets all afternoon. The show was pretty good for me... I'm always attracting black metal fans in Quebec City.

Montreal at Katacombes was another story... the show kept getting delayed and I was playing last, ended hitting the stage at 2:40am. Everyone was drunk, included myself, and the sound was pretty bad. There was this guy who came on the stage and unfolded a huge flag of a shark. Then he sat down on stage and started pounding for the rest of the set... by 3:00am, I had just about enough, and the soundman was probably about to pull the plug, so I ended up doing that myself.

Monarch played again the next day at the LFH, as their powerviolence project called Rainbow of Death. They were excellent, and it was quite an astonishing contrast to see them play a 12-minutes hypercharged set after seeing their slow droney doom set half a dozen of times. We were sad to see them leave St-Henri a couple of days later. 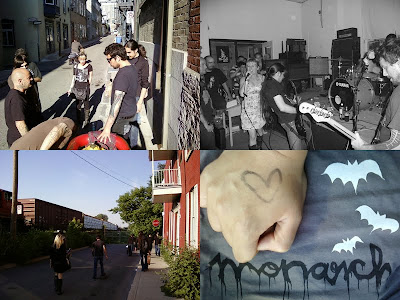 The church show in Trois-Rivières was very special... The performers were in the middle of the dome, with 6 speakers around them. Mattresses were placed on the floors so that people could sit or lay down. It was quite a success, a lot of people attended. Even neighbors and regular church go-ers. One old lady came to hug me after my set, she must've been over 70 years old, said I played music of angels. 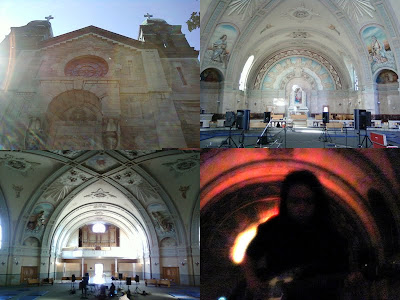