Awesome review of Blackhaunter (Elevation) in the Big Takeover, Issue No. 64, with the best name dropping I could hope for: GY!BE, MBV, Low & David Lynch! Also, I'm definitely taking this quote "relaxation tape for demons" as an artist description! Read it:

Slow waves of sound wave breathe into the first song, and continue for the next seven minutes. I'm not sure what I was expecting with a "post-shoegaze" description, but this is almost post-everything. Experimental lush soundscapes, created with minimal notes and chords, sound like a capture of one background effect off of My Bloody Valentine's mixing board. Drums and keyboards kicks in on "Vampyr" as we shift into ethereal gothic oceans, like Godspeed You! Black Emperor covering a song by Low, and then next into a nine-minute journey that feels like a David Lynch backdrop. These sounds are pulled like sonic taffy and stretched out so far, that you can't even see the rock that it's supposedly post from. It's like a relaxation tape for demons, I think! Check it out. (elevationrecordings.net) 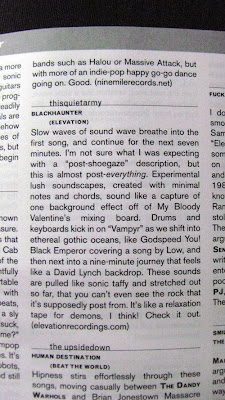 Just received a gift from my friend Graeme! It is the TQA cd & dvd Europe tour!!! Really very nice artwork and idea, love the photos and the letter! I feel blessed! Wish you the same!