More reviews and my reviews of their pointless reviews

Actually, they're kind of pointless reviews. But this blog is like my scrapbook, so everything gets posted here. Et hop!

While the first reviewer claims he's a guitarist and decides to review the album based on what he thinks he knows about how I play with effects - not sure what he's trying to prove, really. I mean, what kind of reviewer write things like "Then some swooping flanger, etc. Blah."? Just for the record, no flanger was used on this album, ugh. But that's not the point. This statement is: "I fear that my familiarity with Quach’s technique prevents me from a more objective appraisal of this release". Brilliant. 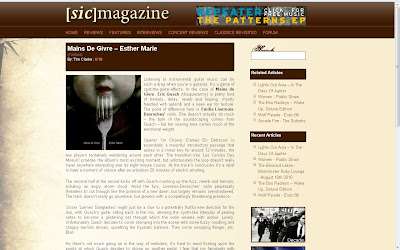 The second reviewer decides to write some form of drifting prose poetry about the album, in polish. Evidently, I had to use google translate to get a feel of what was written --- unlike japanese, the polish-english translator is not bad at all. Check it out: here. Cute right? I appreciate the effort though, just writing whatever you're feeling as your own visual and emotional interpretation of the music while listening to it. But how does that justify anything about any given review score, good or bad... no idea. 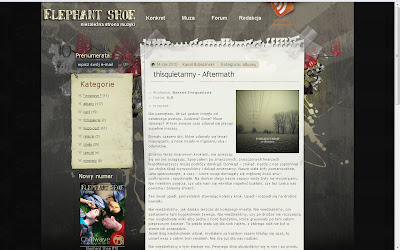 And last but not least, this one is from S.S.G. The reviewer treats Meridians as a "post-rock" record, looking for "post-rock" within that record, writing this review from a "post-rock" point of view... I don't know. Essentially, the term "post-rock" is mentionned several times throughout this review and has funny statements such as: "But Meridians never claimed to go anywhere, post-rock was always more concerned about the journey itself."

... Post-rock? Seriously? Who said anything about post-rock. What the. Why. What. Why? Correct me if I'm wrong, but I thought post-rock was about using the elements in rock music such as guitar, bass, drums and you know, push its boundaries out of the traditional conventional sounds and structures of rock songs. But here we have two guys making drones out of their guitars... Uhhh. I don't get it. Maybe thisquietarmy does have a little of post-rock type of guitar sound on some past tracks, but that's about it. Scott & I made a collaborative ambient/drone record, why don't you treat it as one? 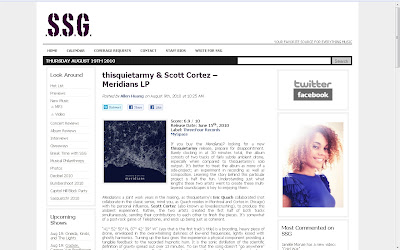 I honestly don't get these reviews - but hey, thanks for writing about the records, I still appreciate them. After all, 6 + 6.8/10 + 6.9/10 aren't bad scores at all. In fact, they're actually quite reasonable - no bitterness at all here. But their content... wow, just wow.
Publié par THISQUIETARMY à 21:30