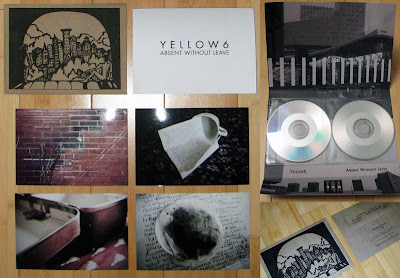 This release teams up two recurrent names that have often been tagged as ambient, post-rock & electronica: Yellow6 & Absent Without Leave.

Yellow6 is Jon Attwood, a guitarist who grew up in the early 80s London punk scene in which he played in many bands. Inspired by space/post-rock, he launched his solo project in the mid-90s and went on to release 9 albums on various labels including the defunct Resonant Records and co-founded Make Mine Music (Epic45, Piano Magic, Library Tapes, July Skies). On this release, he documents his experimentations with newly acquired toys such as the Fender Bass VI guitar, Boss Feedbacker & EHX Freeze pedals.

Disc 2 : Absent Without Leave - Waiting for the Snow to Fall

Absent Without Leave is George Mastrokostas from Athens, Greece - not a place reknowned for its ambient/post-rock scene. Yet, it works to his advantage as Absent Without Leave stretches out his arms to artists from around the world, has collaborated with the likes of Port-Royal, Millimetrik & Televise, and has released objects on labels in Canada, UK, USA, Japan as well as his own Sound in Silence. For this release, George presents a long 3-part piece called 'Waiting for the snow to fall', which somehow reminds us of a hastier, driven composition from Stars of the Lid.