Sepulchral Productions, Montreal's underground black metal label & promoter, invited me to perform on a bill with Miserere Luminis, a collaboration between Gris & Sombres Forêts from Montreal & Quebec, and Falls of Rauros from Portland, ME. The idea of fitting on that bill & playing for a black metal crowd seemed odd at first, but it's also what drew me in as well. I liked the challenge and I'd rather play for new people anyway. Playing in a completely different music scene is like playing in an entirely different country.

The show took place at Théâtre Plaza, which is a really nice theater (approx cap. 500?) that is being used for the weekly shoot of Belle et Bum, a musical variety show with Genevieve Borne & Normand Brathwaite on Tele-Quebec. If that wasn't weird enough, this is also where I saw Godspeed You! Black Emperor four nights in a row, in January 2002. Back then, the place was falling apart and all, which fitted the mood... But now it has been given a face lift and it's fully equipped for high-end sound and lightning.

The latter was part of the problem for my performance. When you're playing such a big venue with tech, sound, light crews... you're completely at their mercy, no matter how much instructions you give them during pre-show. As a result, my video projections, a very important aspect of my performance, malfunctioned at the beginning and in the middle of my set, then completely disappeared. It really disoriented me as the videos are more than just a visual support, they're like my virtual band mates, and they're also being used to hypnotize and draw in the ADD-ers and get them to focus. When the videos failed, the light crew started to use some disco spotlights to try to compensate, which were really distracting and totally not appropriate. Sound-wise, I also made a bad choice bringing my two Traynor tube combos for such a big space, after my two shows with Caspian (see previous entry), and I was pushing them too hard.

Nonetheless. Considering that most people had never seen me before, the response was still good even though I wasn't satisfied with my performance. Sold some merch, signed some autographs (that's always funny) & got paid well. All in all, a solid evening for me - huge thanks to Sepulchral for having me.

The other bands were pretty good too and they all really liked what I did, which is always good, coming from other musicians, especially 'metal' ones which are usually more technically skilled than myself. I hung out with Falls of Rauros after the show and the day after. I took them around, to Profusion, to the Old Port, then to Aux Vivres for dinner. They're all really nice people and we got along great. We'll probably cross paths again, soon hopefully.

And photos that were sent to me by Bakt El Raalis: 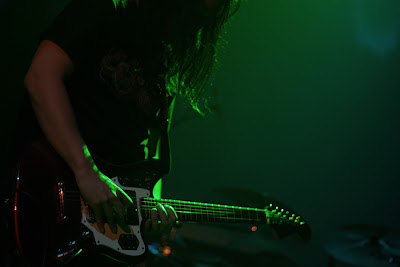 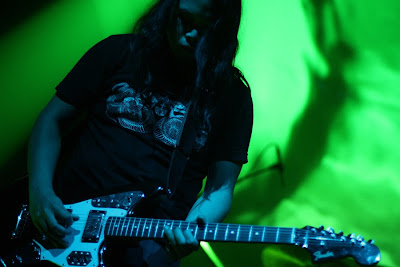 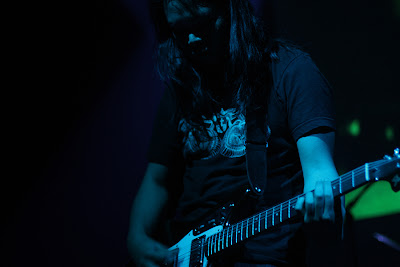 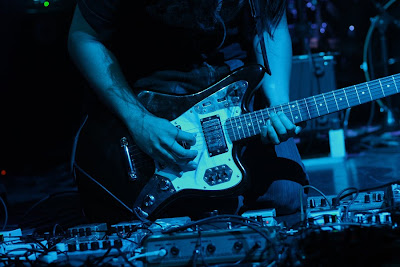