We Are Post Rock presents:
thisquietarmy + Caspian in HD
Live at Divan Orange, March 12th.
(Under The Snow Festival) 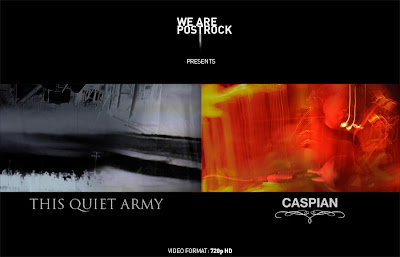 The live thisquietarmy video is mostly a filmed montage of my projected visuals on stage as it was pretty dark on stage and the guys could not get good clear shots of me - however i do appear in the end, at 16:35 as to give you an idea. The audio is not the live audio as they had problems capturing it properly, so studio works were used instead. Still, great first effort guys --- I appreciate it, thanks to Joe & Daniel!

Check out the Caspian live video as well. It is a different type of montage, with great transitions and enough light to work with, great shots & good sound, very well done!
Publié par THISQUIETARMY à 23:49