Mainly, because this was decided about 12 hours ago, after meeting up with Jon/Yellow6 (UK) last night upon his arrival in Montreal. thisquietarmy will be a special guest tonight, for an impromptu improvised set with Yellow6, and... maybe Apillow too? We haven't had a chance to talk to him yet. 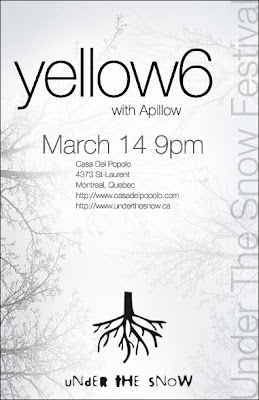 On a side note, it was an amazing night thursday at Divan Orange. Thanks to everyone who came & supported, it was loads of fun. Special thanks to CASPIAN for burning down the place (the new songs are amazing, it will be a HEAVY record, can't wait), Jeff & Under The Snow for providing a great festival for us to play in.

And just a heads-up for Joe & Daniel who are starting a new website called "We Are Post-Rock". They filmed Caspian's set in HD, as well as some of TQA's, and both sets will be featured on its opening, March 30th. Bookmark this: http://www.wearepostrock.com
Publié par THISQUIETARMY à 12:19